A Tale of Two Sisters: Unlocking Potential for the Akana Twins

To Karen Akana and Rob Syrstaad, the summer of 2014 seems like a lifetime ago. They had just moved their family across the country to Little Rock, Arkansas, and life with their two-year-old twin girls, Makena and Aurora, was busy. Then one day, one of Karen’s best friends said something she didn’t want to hear. “She said, ‘I want to tell you something, but I don’t want you to freak out. I think they might have autism.’” Karen and Rob were very upset, and they didn’t know what to do. They called ACCESS.

In the fall of 2014, Makena and Aurora began their journey at ACCESS. “We jumped right in,” said Karen, “full-time school and all three therapies for each girl.” Based on their needs, the girls were placed in two different classes. It appeared that Makena’s needs were the greatest of the two, and for that reason, she was placed in Ms. Suzanne’s foundations two-year-old class, focusing on a language-rich version of the ACCESS curriculum. Aurora was also placed in a two-year-old class, but it followed a faster pace and was integrated with typical peers.

“Suzanne Carter was one of the first people I met at ACCESS,” recalled Karen. “She had so much confidence in how to help our family. I liked how all of the staff greeted the kids when they walked down the hall, trying to constantly engage them. You could tell that every person really cared.” Karen and Rob felt ACCESS could give their girls the help they needed, and they enrolled them in the early childhood and therapy programs immediately.

“I liked how all of the staff greeted the kids when they walked down the hall, trying to constantly engage them. You could tell that every person really cared.”

“When Makena started in my class, she had no functional communication, no self-help skills, and no way to interact with the world except to either have total control or scream,” remembered Suzanne. “We had to walk a fine line between honoring her true need for control and pushing her outside of her comfort zone because we knew she was capable.”

During that first year at ACCESS, Makena started showing tremendous progress very quickly. “Her progress with structured tasks like puzzles and handwriting was almost instant. Once she understood expectations and got into a routine, she did great,” explained Caroline Chang, occupational therapist. “It turned out that her fine motor and visual motor skills were significantly higher than her initial testing showed.”

“When I first began working with Makena five years ago, she presented with a profound language and feeding delay,” remembered Melissa Thomas, Makena’s first speech-language pathologist at ACCESS. “After the first few months, she took off. I have worked with the preschool population for the past 20 years, and I have never seen such rapid progress with any student.”

The ACCESS multi-sensory, team approach worked well with Makena. “By Christmas we had a little girl who could talk, and by summer, she had blossomed,” explained Suzanne. “She was potty-training, conversing, and appropriately asking adults for help.”

Meanwhile, in the other two-year old classroom down the hall, Aurora was not showing the same progress as her sister. “Within the first month of school, we began witnessing a regression of skills with Aurora,” said Suzanne. “We were able to have her quickly and thoroughly evaluated through the ACCESS Evaluation and Resource Center, resulting in her official diagnosis of autism spectrum disorder.”

The team recognized that Aurora’s needs were different than Makena’s. Instead of progressing to a pre-k 3 curriculum the following year, she moved to Suzanne’s two-year-old foundations classroom. “We knew every potential was there for Aurora to benefit from our literacy-based curriculum. The foundations class offered the same curriculum as her previous class, but at a slower pace with an even stronger focus on language.”

That year, the team saw Aurora’s anxiety decrease with the smaller class size and language-intensive teaching strategies. However, her progress looked very different than Makena’s. Instead of making leaps, her progress was slow and steady – gaining one skill at a time. “If she was making gains in one domain, she would plateau in the others,” recalled Suzanne. “Progress for her came in one developmental area at a time, not simultaneously. Step-by-step, brick-by-brick, we got to the same place.”

The following year, Aurora moved to the three-year-old class with Ms. Brittany. “That was the year we started to see how much academic potential she had,” said Caroline. “Even though she didn’t have the language skills to express it yet, we could see in our therapy sessions that she had been absorbing so much knowledge. When we directly asked her questions, she knew the answers almost every time.” Aurora’s learning style required a lot of repetition. “We could do the same thing 100 times and think ‘we’re never going to get this,’ but on the 101st time, she comes in and has it from then on,” explained Caroline.

It was in the three-year-old class that some of Aurora’s biggest struggles began to reveal themselves. “If she needed assistance with something, Aurora would exhibit what is called ‘resetting’ behaviors – going back and redoing the tasks,” said Caroline. “For example, if she was asked to complete a task but made a mistake, she would become very upset and have to start over multiple times to ‘reset’ herself before she could transition to the next thing.”

This would cause Aurora to sometimes miss lessons in class. If she couldn’t do something completely independently or correctly, she would not be able to attend to the next activity since she had not mentally ‘reset’ from the previous task. “This was heart-breaking to us because no amount of assurance could calm her,” said Caroline. “The whole team walked on eggshells around her because no one wanted to upset her by correcting her, but we wanted to push her to her full potential. It was very tricky.”

Karen and Rob struggled with this same behavior at home. “For a while, we were always late to school because Aurora would not get dressed. She would not let us do anything to help her, and she would scream if we picked out the wrong shoe or something,” said Karen. “When it was time to go home, it would take 5-10 minutes just to get into her car seat because she insisted on buckling herself. She needed assistance but would scream if help was offered.”

This was more than just the typical inflexible thinking that can be prevalent in individuals on the autism spectrum. The team felt that Aurora exhibited symptoms of OCD, so they met with Karen and discussed concerns and possible avenues for support. “Once we began approaching those behaviors differently, we began to see progress,” expressed Caroline. “She now tolerates correction significantly better. If she misreads a word, she will tell herself to ‘try again.’ She repeats the word one time, and we can move on, still with a sense of accomplishment.”

Most recently in the four-year-old class, Aurora has done exceptionally well with reading. Sounding out and blending sounds has been tricky because she is very literal with her sounds, but she has a great visual memory and is a strong sight reader. Once she knows that a specific combination of letters creates a word, she won’t forget it.

Aurora continues her journey with ACCESS these days, participating in the kindergarten transition class along with therapy services. Her diagnosis of autism spectrum disorder allowed her to receive Applied Behavior Analysis therapy (ABA), and she has done tremendously well.

Makena never received an official diagnosis but continued her journey with ACCESS beyond the Suzanne’s class, receiving full-time early invention through education and therapy until she was five-years-old. “She is a textbook case of a child who has developmental delays without a diagnosis. However, she still needed the same intensive early intervention to help close the gap,” said Suzanne. “Her story points to what I tell families all the time as an early intervention specialist. At ACCESS, we treat the strengths and weaknesses of the child, regardless of the diagnosis or lack thereof.”

“Her story points to what I tell families all the time as an early intervention specialist. At ACCESS, we treat the strengths and weaknesses of the child, regardless of the diagnosis or lack thereof.”

Looking back, Karen recalls, “Our life was so stressful for so long. Even after Makena turned a corner and could verbalize her frustrations, she would still have meltdowns at home. Sometimes, I would dread picking her up from school because it was so stressful. Now we lead what I would consider a calm, regular life. ACCESS has been life-changing for our family.”

“They are like two normal kids,” Karen says of her beautiful twin girls. “They have fun. They sleep in the same room, and you can hear them singing songs and saying good night to each other. Aurora responds to Makena now when she speaks to her, and she didn’t do that before.”

Makena is now in the first grade at The Anthony School, and she is doing exceptionally well. “At our first kindergarten parent-teacher conference, Makena’s teacher told me she was at a reading level of 20,” shared Karen. “You have to be at a 6 to be promoted to first grade. That was all ACCESS. The early intervention services really set her up for success. I’m not worried about her in class because she’s doing amazing.”

Caroline, who has been with Aurora on this journey since the beginning, says of her future, “I’d love to see her continue to take the foundational skills she has learned here at ACCESS and generalize them across her other environments – school, social events, extra curricular activities, and more. She has the skills to excel in higher level academics and has all the tools she needs to be successful.”

Working with the Akana girls has made a lasting impression on everyone who has been part of their team at ACCESS, especially on Caroline. “I learned so much from working with Makena and Aurora,” said Caroline. “They taught me that initial impressions don’t always give you the full picture. Symptoms of developmental delays present differently in every child. Initially, we thought Makena had more special needs, but Aurora was the one who has needed us most in the long run.”

“They taught me that initial impressions don’t always give you the full picture. Symptoms of developmental delays present differently in every child.”

Karen’s advice to parents who may suspect their children need a little extra help is, “Call ACCESS. Get your child evaluated and do it right away because it makes a world of difference. The team at ACCESS unlocked the world for our family.” 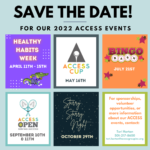