Amy Kelton sat in Dr. Falls’ office and cried. She knew that Bella could not continue 5th grade in a traditional public school setting. Bella needed a change…but what would that look like? 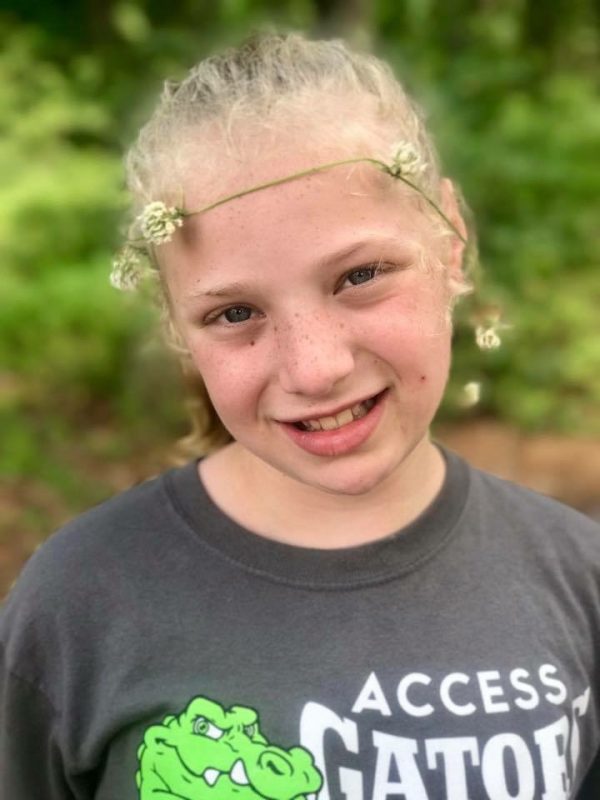 Amy Kelton’s experience with the ACCESS Evaluation and Resource Center (AERC) was nothing short of life changing. She recalls, “One of our daughters, Isabella (“Bella” for short), had been having a lot of social and behavioral issues. Her therapist asked if we had ever considered having her tested for autism. While I was overwhelmed, I was also grateful, because I had thought about this for a long time.” Amy and her husband wanted to get Bella tested as soon as possible, but everywhere they looked, the waiting list was at least five to six months out. A friend suggested that they consider the AERC and only a week later, Isabella was seen for testing. One week after that, Amy and her husband received Bella’s results.

When Amy reflects on Bella’s testing she notes, “I wasn’t expecting the tests to be so thorough. When I met with Dr. Falls to review Bella’s results, I learned that she did not meet the criteria of autism, but the testing did reveal she was working four grades lower in math and three grades lower in reading. I wasn’t terribly shocked about the reading because she had been diagnosed with dysgraphia and dyslexia the previous summer. But four grades below in math? That stunned me.” Amy has been an elementary school teacher for 15 years and because of this, feltbetter equipped her to stay abreast of each of her children’s academic skills. When she learned how behind Bella was, Amy felt hurt and angry.

Like many parents, Amy was upset that she had not seen warning signs herself. But she also felt angry that the public school system had not caught Bella’s issues sooner. Amy observes, “My child attended the very school I worked in. I thought it was a great school then and I still think it’s a great school now! We were blessed to have some of the most advanced technology for teaching and progress monitoring. I was friends with her teachers—and I still consider them great educators! But it wasn’t working for my child. I had been very involved; had seen work samples; spoke with her teachers (my co-workers) on a daily basis about Bella’s academics…I just couldn’t work out how the curriculum could be so advanced, yet allow for such gaping holes to occur in my daughter’s education. Amy Kelton sat in Dr. Falls’ office and cried. She knew that Bella could not continue 5th grade in a traditional public school setting. Bella needed a change…but what would that look like?

After the initial shock had worn off, reality set in about Isabella’s future and how it was going differ from that of the Kelton’s oldest daughter. Amy says, “My husband and I started looking at ACCESS as a school placement, rather than just a testing facility. We looked at their unique curriculum and specialized teaching methods in relation to children with dyslexia. Bella needed intense intervention, including teaching to fill gaps and catch her up as much as possible. We first observed in the classroom she would be enrolled in and decided almost immediately that it was our only hope.” But Amy and her husband were worried about telling Bella that she would have to leave the school and friends she had come to know.

Amy recalls her conversation with Bella: “I told her that Dr. Falls had told me how hard she had worked on her testing, and that the results showed she was a very smart girl but needed to learn things in a special way because of her dyslexia. She shook her head. I told her I had heard of a school with other kids who were dyslexic. She sighed and said longingly, ‘I want to go there.’ It was at that moment I realized how isolated she must have felt, thinking she was the only person with dyslexia.” Amy and her husband knew they would do whatever they had to do to get Bella enrolled in ACCESS. The Keltons have five children and while it wasn’t necessarily in their budget to pay for private school, they also knew that the ‘status quo’ wasn’t meeting Isabella’s needs.

Happily, Amy reports, “Isabella has been enrolled at ACCESS now for nine months. During that short amount of time, she has become so much more confident in her academics. I cried when I found out she read her first chapter book in December. She even chooses to read now! Her teacher has also noticed huge improvements in her spelling and writing; for example, she has a better handle on the mechanics of writing and adds more details to her stories. In math, Bella is slowing down to figure out word problems and now she enjoys not only math, but also school in general for the first time ever!”

While the Keltons are hopeful that in time Bella will be able to transition back into a traditional school environment, Amy acknowledges that, for now, Bella is in “the best place she could be right now”—cultivating her individual potential at ACCESS.

Call 501-217-8600 to schedule an appointment with the AERC or visit www.accessgroupinc.org to learn more.