An Interview With His Parents, Gretchen and Randy 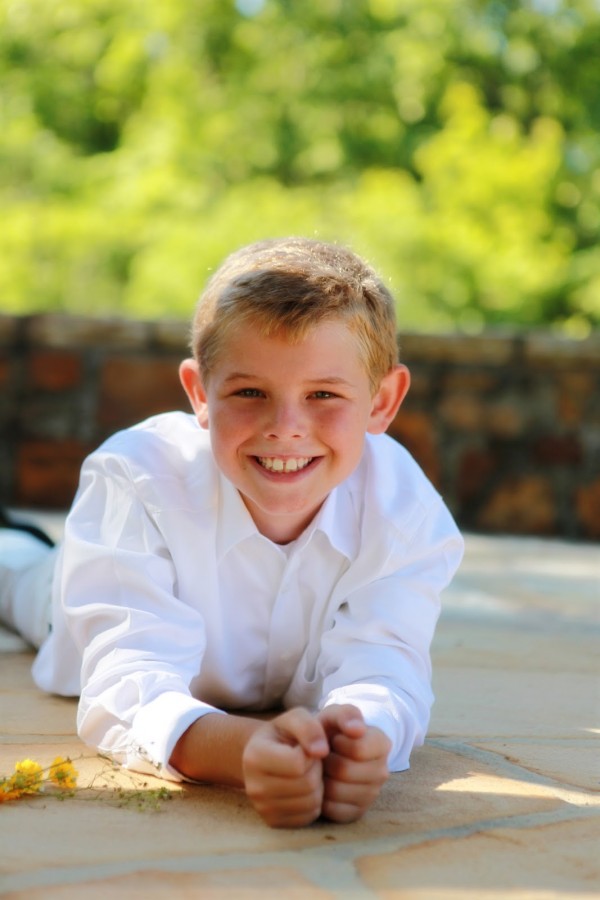 “At first we thought he just wasn’t paying attention and focusing when reading,” recalls Gretchen Pierce, mother of 9-year-old Nelson Pierce, diagnosed at 7 with dyslexia.

Attempts to get him to read at home would result in “yelling, screaming and crying. He would mix up words like “he” and “she” and had no point of reference in a story,” said Gretchen.

Nelson avoided reading, including reading in his first grade class, even though he received good grades in the subject.

Looking back, Gretchen and her husband, Randy, realized Nelson was “smart enough to fake it.” They hired a tutor to help Nelson the summer between his first and second grade years.

“He refused to read for her. We thought, ‘Do you think he might have ADD?’ but he was never disruptive in class,” said Gretchen.

The Pierces recall thinking Nelson could be dyslexic when he was in preschool and kindergarten because he would write letters backward. They were told this was typical for a child his age. He never had rote memory problems or word recall problems, which can be warning signs of dyslexia. He also never had spelling problems, which Gretchen now attributes to his ability to memorize word spellings.

Having known children who had been tested at the ACCESS Evaluation and Resource Center, Gretchen and Randy scheduled Nelson for testing there in September 2008. The subsequent diagnosis of dyslexia was something of a comfort:

“Some people don’t tell their kids when they’ve been diagnosed with a disability,” said Gretchen. “We thought it would be better to tell him: ‘Your brain reads differently than other people’s brains.’ He felt better.

“We said, ‘We know you’re smart.’ We felt bad when we figured out he had a problem,” said Gretchen. They then told Nelson about famous dyslexic people.

“For whatever reason, he really latched on to Albert Einstein,” said Gretchen. “It was: ‘These really cool people have what you have.’”

Nelson was then enrolled in the ACCESS academic therapy (specialized tutoring) program for one hour a day, three days a week with academic therapist Susan Lockhart, M.Ed. Susan travels to Christ the King School, where Nelson attends third grade, to provide his therapy during the week.

“There was a tangible difference – drastic – with his ability and willingness to read following therapy,” said Gretchen. “He was much more successful within three months.

“Susan is fantastic. She’s good at figuring out how he ticks. She plays games with him, keeps him motivated.”

Looking back, The Pierces’ only regret is wishing they had had Nelson tested a year earlier.

“That last half of first grade was difficult, not academically, but personally. His self-esteem really took a hit,” said Gretchen.

She and Randy are happy with Nelson’s current academic progress, noting that, at his year-anniversary evaluation in November, he was reading at grade level. They are keeping him in the ACCESS academic therapy program to give him a solid foundation for increasingly complex educational work. (Gretchen: “Third grade is that year they can’t fake it anymore because of the vocabulary needed.”)

“In a year, he far surpassed anyone’s expectations, and I give that credit first to him, and then to Susan for figuring out how to get to him and what works with him,” said Gretchen. “He’s worked really hard. He’s mature enough to understand: ‘If I work hard at this, I will get results.’”

His teacher, Edna Koehler, agrees: “When Nelson first came in, and I knew he was dyslexic, I held my breath as far as his abilities. He started off reading first and second grade books, and now he’s reading fourth grade books. I can’t believe his progress! He does well in every subject. I still don’t know how you ACCESS did it – how you got him reading like this.”

Nelson continued his academic therapy sessions at ACCESS last summer; his current sessions with Susan at his school are focused on written expression, spelling, punctuation and story-writing.

“Now he reads on his own. We catch him up at night, staying up reading. Not only does he read, he understands what he reads,” said Gretchen.

Because of the Pierces’ experience with Nelson, they were ready when their daughter, Vivian, 7, began showing signs of dyslexia. Recall issues, memorizing spelling words and rote memory skills were “never easy for her,” Gretchen said, although her reading skills were fine. After a first grade teacher shared that Vivian had trouble writing spelling words, she was also assessed and diagnosed at age 6 with mild dyslexia.

Gretchen described Vivian’s diagnosis as “totally different. From an academic standpoint, [her diagnosis] almost seems more challenging.” Gretchen noted that Vivian struggles to remember math facts and has trouble copying from the board and writing.

Vivian is also enrolled in the ACCESS academic therapy program for one hour a day, twice per week.

The Pierces note that when Nelson was diagnosed, they were given a list of tutors in the area, many of whom were less expensive. Gretchen had friends who had employed some of these tutors and whose children had not improved academically while enrolled in their programs. She recalls “glowing recommendations” for the ACCESS academic therapy program.

“ACCESS is worth every penny,” said Gretchen. “There was no question when it came to Vivian, where she would go.”

“Nelson has worked so hard and done incredibly well in academic therapy. His yearly testing shows that he has made much progress with his phonological awareness skills, sight word and phonemic decoding efficiency, reading fluency, reading comprehension and spelling,” said Susan.

“He has been able to work through many frustrations and hurdles with reading to meet and even surpass goals set for him at the beginning of each semester.  What is most encouraging is that Nelson is now applying what he has learned in the context of therapy to his outside reading and schoolwork.  For Nelson, the intensity of our individualized academic therapy program – along with the reinforcement work done at home, great parental support and his motivation to do well – have allowed him to achieve many successes this past year.”

ACCESS treatments for dyslexia include an individualized, multi-sensory, phonics-based approach, as well as tools designed to help children organize their thoughts and physical space.

ACCESS provides therapy to several students in our area at their respective schools and is excited to share Nelson’s story with our supporters. Thank you to the Pierce family for your hard work and support!