The Full Spectrum of Individual Potential

"Caring about the individual is where it all starts. All children need that to aid in their development, whether they are on the spectrum or not. That’s what makes ACCESS invaluable." - Darrell Finney, Harlem's Father 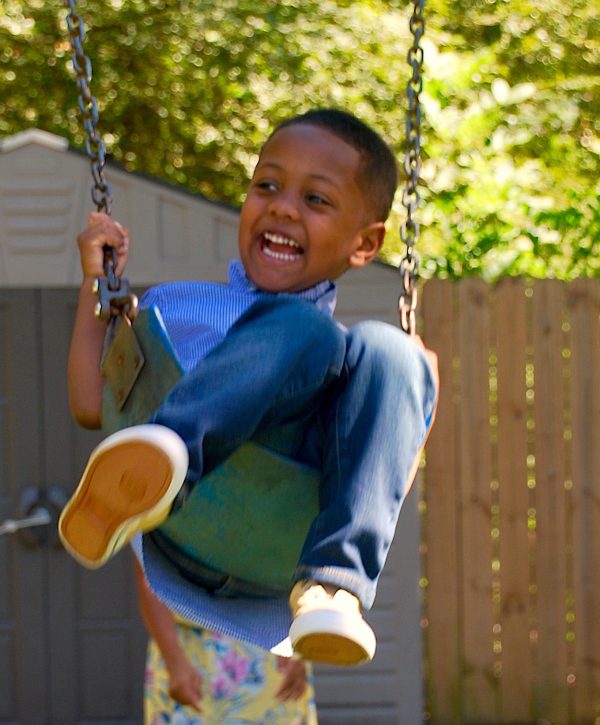 Two years ago, nervous parents Darrell Finney and Mischa Banks sat in the reception area of ACCESS’s Stella Boyle Smith campus with their son Harlem, knowing that the results of his evaluation might change all of their lives forever. When Harlem was around 18 months old, Darrell and Mischa noticed he was only using one or two words. “We figured this was behind the normal advancement of children his age so we started asking [about resources], and my sister recommended ACCESS,” says Darrell.

Harlem was brought to the ACCESS Resource and Evaluation Center (AERC), and it was determined that he had some developmental delays and could benefit from occupational and speech therapy. Harlem began outpatient therapy at ACCESS and was later enrolled full-time in an Early Childhood toddler class. The family’s ACCESS journey had officially begun.

“The first time I met Harlem, I was immediately impressed by how intelligent and full of life and energy he was. He was always on the move and loved to learn,” recalls Caroline Chang, Harlem’s occupational therapist from the start. As a toddler, Harlem struggled with appropriate peer interactions, following directions, and attention to structured tasks. He sought movement opportunities throughout his day that interfered with his ability to participate appropriately in basic activities and play. Harlem was also a very picky eater exhibiting avoidant behaviors at mealtime which included crying and gagging – likely related to deficits in sensory-processing and language.

While he made great progress in his first year at ACCESS, Harlem still wasn’t up to the level of classmates his age. Darrell recalls, “There were things at home that made me wonder…He wasn’t eating. He wouldn’t eat different foods and couldn’t feed himself. He would also use non-verbal communication to express his wants and needs. He frequently had breakdowns that were characterized by repetition of words. We just knew something wasn’t right.”

In August of 2016, Harlem transitioned to the Early Childhood two-year-old class at ACCESS. When Molly Ramsay, his new Speech-Language Pathologist began treating Harlem last September (right around his third birthday), he was extremely echolalic, repeating words and phrases others said to him, and mainly spoke in one- and two-word utterances. He was able to label a variety of objects, but did not really use language for other purposes, like requesting his wants and needs or asking for help. Harlem did not consistently respond to his name, follow directions, or answer questions. He lacked adequate language skills to verbally interact with other children. Molly remembers, “I could tell Harlem was a sweet-natured and enthusiastic little boy. He loved reading books and any activity that included animals (two things he still loves). Harlem also enjoyed being around his peers, but didn’t quite understand how to interact with them during play.”

Late 2016, Harlem’s ACCESS team reached out to Kim Newton, Psychological Examiner with the AERC. “His teachers and therapists noticed his ‘scripted’ speech and his excessive interest in letters,” says Kim. After discussing with Harlem’s parents, they all agreed that Harlem should be evaluated again and in February 2017 he was diagnosed with autism spectrum disorder (ASD). “When Harlem was first diagnosed, I was devastated,” admits Darrell. “Like most of us, I’ve been through some pretty tough life experiences, but that by far was one of the hardest things I’ve ever had to deal with.”

By the end of 2016, after many more months of targeted, intense therapy and early intervention, Harlem was showing marked improvements. The multisensory and individualized curriculum he was receiving in the classroom combined with speech-language, feeding, and occupational therapy services helped to facilitate these changes. “The most important thing for children on the spectrum is early intervention—something ACCESS is well versed in. Their comprehensive approach to therapy and curriculum make a tremendous difference and help create an environment where Harlem can interact with so many different children and further cultivate his social skills,” says Darrell. While Harlem still has challenges he must work on, Mischa says it best: “Every child is different. They are going to go at their own pace. What’s most important is that you are able to chart measureable progress.”

Frequently, Darrell can be found walking the halls of the Stella Boyle Smith Early Childhood Campus. When he drops Harlem off or picks him up, he likes to observe his son interacting with his peers and learning new skills. “Many parents who have children with ASD comment about how they have a hard time interacting with them or with others. But with Harlem, it’s the exact opposite. When we go to the playground, he’s never met a stranger. He’ll walk right up to children he doesn’t know and just say, ‘Hey, guys!’” Darrell continues, “Just to see him interact with his peers like that is amazing.” Caroline reiterated this progress with Harlem as well, sharing one of Harlem’s most recent breakthroughs. “Harlem, on more than one occasion now, will seek out a peer at school, ask them to play something specific, and then sit and attend to whatever activity they have chosen. They take turns and have so much fun together! This is the ultimate reward for early interventionists—to see a child take the skills they have practiced in therapies and generalize them to everyday life,” observes Caroline. She adds, “Harlem is a kind, vibrant, and intelligent child who loves to read and learn. His potential is limitless…I know there are big things in his future!”

Molly is also quick to point out Harlem’s progress, noting, “Harlem has blossomed during his past couple of years at ACCESS. Just in the past year, he has gone from using one or two words at a time to using longer phrases and sentences when speaking.” To say Harlem’s language skills are constantly improving would be an understatement…Harlem loves letters and reading. Molly started working on some phonological skills only to find out he already knew most letter sounds and could read several words. Now, he attempts to sound out even unfamiliar words, and his reading skills far surpass what is appropriate for his age level (Harlem turns four this month)! This is not uncharacteristic—the CDC reports 46% of ASD children have above average intelligence.

When asked what they would like new parents to know about ACCESS, Mischa says, “I would want them to know that whatever the diagnosis is for their child after being evaluated by the AERC, they can step back and let ACCESS do what it does best. The ACCESS staff love and care about the kids so much. Of course it’s hard for any parent to learn that their child is faced with challenges that they cannot take away, but ACCESS has made this entire journey so much easier and we feel more comfortable and assured that things will continue to get better.” Darrell elaborates, “Caring about the individual is where it all starts. All children need that to aid in their development, whether they are on the spectrum or not. That’s what makes ACCESS invaluable. So I’d tell parents to run, jump, take a plane, ride a train, go by automobile—parachute if they have to…whatever they do, they just need to get to ACCESS!”

Darrell beams as he talks about his son. “I’ve come to accept Harlem’s ASD and the challenges that come with it. None of that changes my child’s unique personality or my love for him. I don’t ever want my son to feel self-conscious about having autism because the reality is that at the end of the day, we’re all just a little bit different, you know?

The ACCESS Evaluation and Resource Center provides comprehensive evaluations and a progressive educational resource lab. Our professionals can help parents pinpoint specific deficits their child may possess. Once those gaps are identified, we can devise a plan to meet their child’s unique needs. Learn more about the ACCESS Evaluation and Resource Center by calling (501) 217-8600 or visiting www.accessgroupinc.org.